There are very few circumstances in which I’d expect my phone to blow up with text notifications while I’m sleeping: a family emergency (most likely from my sister, since she texts a lot)…  or someone randomly professing their undying love for me. And that’s basically it.

What I didn’t expect was the following: 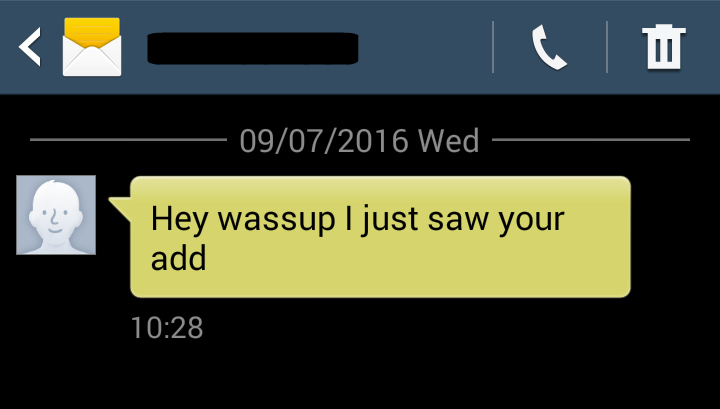 What in the unbelievable fuck is going on? 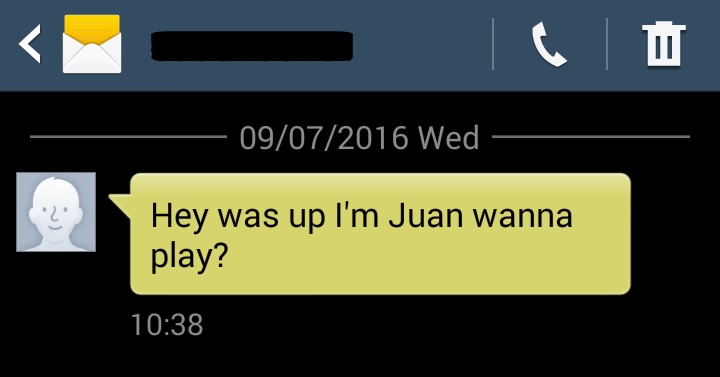 Holy shit, someone posted my number on Craigslist.

I’ve had people mistakenly call me because they dialed a number wrong about an ad for a truck or something. But with so many people – there were about a dozen more texts from others – I knew it couldn’t be just a typo. And while I’m trying to figure this all out, I’m getting calls from restricted numbers, as well.

I texted back a few of the Lotharios, who were kind enough to apologize and give me links and screenshots of the ad:

As is done on Craigslist, my number was placed in the ad in separate parts to bypass bots. When I found the ad, I flagged it and the texts and calls almost immediately stopped from the wannabe cuckolders.

This could have been an accident. A totally real woman with a poor handle of English might have really been seeking someone to cheat on her husband with. Stranger things happen in the world. This wouldn’t be that scandalous. You do you, boo.

This also could have been done on purpose. Do I know who did it? Nope. And it’s highly probable I’ll never find out who. But if it was done on purpose, there could really only be a candidate from one specific place: OKCupid. None of the people close to me would come up with a prank like this – and if they did, they’d tell me about it so that they can have a good laugh with me. On the ever wonderful crapshoot that is OKC, however, when I determine a guy is interesting and nice enough to chat with, I go ahead and give him my number so we can continue to chat and/or logisticize a potential date more conveniently. And no, I don’t always end up going on a date with them because I lose interest or even just lose track of new people I text.

It’s not like I’m telling him where I live or what my full name is. What’s the worse that could happen? A lot worse than the above, that’s for sure. To be honest, I was afraid I’d find pictures of myself in various stages of undress because yeah, I like to send sexy texts now and then. I was also afraid I’d find information about myself in the ad – my name, where I go to school – or some shaming parody of myself and of polyamory: “Hi, my name’s Michelle and I’m just a lonely slut looking to cheat on my boyfriend.”

If this was on purpose, it was fairly innocuous and I got a bit of a chuckle from it – even if it’s borderline harassment. It’s amazing though. I mean, could it really have been done by some guy who feels salty about me not actively pursuing a date with him? Did I do something to wrong him in any other meaningful way? I just don’t know. If this is really the case, then that’s just beyond sad. It’s a bit disturbing because there have been so many cases of people posting revenge porn about their exes. It’s frustrating and scary. So I’m glad nothing bad happened this time around, but I know I’m going to be more selective when giving out my number now.

And if it happens again, I’m going to go crouching tiger Liam Neeson on your salty ass.

I hope the rest of you lovelies woke up in a much more pleasant way this morning!

One funny thing that came out of this though: my text notification sound is “Ni!” as in the Knights Who Say Ni. So my phone was “Ni”-ing at me like so:

Leave a Reply to Moose and Michelle Cancel reply