Sometimes in the world of the bizarre and wonderful, you end up meeting the oddest people on dates. This ongoing segment on Tantalus Reborn will highlight some of the more interesting ones that he’s  had the pleasure, or displeasure of experiencing. I hope you enjoy them as much as he does. 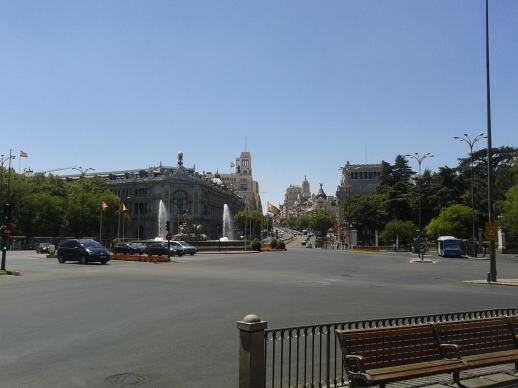 A year and a half ago, I had an internship in an investment bank in Madrid. I think they vastly overestimated my experience for I was given enormous responsibility, and I had never as much as been a burger flipper in McDonald’s. I ended up proving their trust to be wise in the end, and they thought my work to be of superb quality. Yet during those two months of working in Madrid, I was terrified that my boss would walk up to my desk one afternoon and angrily say that I was a fraud and a hack, that I should pack up my things and leave.

It’s with such preoccupations that I walked around the Puerta del Sol in Madrid – a beautiful esplanade at the heart of the former Spanish Empire. The sun was beaming on the colonial style buildings, but I had little mental real estate to spare to appreciate it. Facts, figures, and charts of the Spanish finance sector were being bounced around my brain. Nevertheless, as comedian Robin Williams put it, the problem is that man was given a brain and a penis, but only enough blood to run one at a time.

As such, my brain froze mid financial thought and focused on a girl walking on the streets. She had this determined gait, yet simultaneously seemed to be trapped in a daydream. She was wearing yoga pants, with the amazing body that usually accompanies them, and had this vibe about her where she just seemed to exude positivity. I decided then and there that I needed to go and talk to her.

I ran to catch up to her and stopped her dead in her tracks, as if I was a policeman. I smiled, and said what I’ve mentioned earlier. She seemed to take to this sort of flirting, and we continued for a minute or two. I decided to invite her our then and there, and she agreed. We walked for a couple of minutes, and we went to this café that is hidden away from view.

To the unobservant person it looks little more than a luggage shop, yet concealed on the rooftop there’s a outdoor garden, where you can take in the Iberian sun over coffee and some cake. However, on the outside there’s no indication whatsoever of the foretold paradise. As such, it needn’t surprise the reader that the girl was slightly hesitant of me taking her inside a luggage shop.

I smirked at her, and told her to trust me. She listened to me, and we went inside. We called the elevator, and a minute later, we were there. We sat in the corner, by a small swing set,  and we talked. We talked about hopes and dreams, and soon enough we’d taken a right on sexual innuendo avenue. It was then that I asked her what she found attractive in me, and she laughed at the boldness. I didn’t react and kept looking her in the eyes.

It soon turned into the scene at the end of The Good, the Bad, and the Ugly where there’s a Mexican standoff – the first to flinch, would most likely lose the fight. A second passed, then two, then three… She burst out laughing and said “You win! That’s what I like about you, that you’re direct, masculine and don’t play games when it’s important”

We continued talking, and every so often held hands. As all this was happening, someone from an adjacent table happened to mention that it was getting late. She looked at me slightly puzzled, and asked me for the time, as she seemed to have remembered an engagement. I looked at my watch and responded that it was about seven o’clock.

She grew visibly agitated at this, and said she had to go as she was starting a new job as a waitress. She quickly gathered her bags, and was about to bolt out of the café. Nevertheless, she seemed to recall something, and sat down again. “I have to ask you something” she said. I found this quite odd, yet she continued after taking a deep breath “What’s your opinion on prostitutes?”

I sort of guessed where this was going, so I said that they’re not my thing, but I see nothing wrong with someone doing it, if they do so freely. She sighed in relief and added that it was good to hear me say that.

I questioned her why, yet I figured there was little need as I already knew the answer. It turned out that the truth far exceeded my wildest expectations. She started by telling me that when she was a thirteen, she’d ran way from her house. She was unhappy, and mistreated there so she figured she could try her luck elsewhere. Having said this, the legitimate and profitable employment opportunities for someone underage are few and far in between. Unsurprisingly, she fell with the wrong crowd.

Shortly after, as a young attractive girl, she became a prostitute. Like sharks drawn to blood, so do unscrupulous men to such situations. As such, she soon came under the thumb of a tyrannical pimp. She tried in vain to escape a couple of times, yet she was hunted down each and every time, as he had contacts in high up places.

Defeated, she abandoned all prospects of ever escaping and resigned herself to this miserable existence -that is until she met a man. He came to visit her often, and evidently he had fallen for her deeply. Not only that, but given the sort of social circles she moved in, he turned out to be a black hat hacker. Awkward, and shy, he was a natural fit to the whole environment.

Yet, one night out of the blue, he offered her a plan she couldn’t say no to. He could craft a new identity for her, by forging documentation, she could start a life away from all this. Naturally, she accepted, and in the dead of night she fled with her new identity. She’s been on the run ever since, and that’s why she changed cities and jobs every so often, which is how she found herself in Madrid on that day.

As she finished the story, I had to look down the floor as my jaw had dropped and I couldn’t seem to find it, as my mouth remained agape. That was one heck of a story. She then thanked me, left shortly thereafter, and I gathered my thoughts. I did not know what to make of this, for one she was very fun to be around. On the other, hand I want nothing to do with this whole ordeal, as mobsters may knock on her door any day. The decision was made for me though as over the next few days, she disappeared off the grid.

I thought that was that, but I bumped into her a couple of weeks later as I was out with friends at night. Turns out she was now working as a club promoter, and was extremely happy with it. We said hi and made polite conversation, yet left it at that.

I wish her all the best, considering all she’s been through she deserves it…

Richard is the dark and brooding blogger-seductor over at Tantalus Reborn, where he writes about his own journey of self-development – in travel, love, and sex – while passing on what he’s learned to his readers. Honesty is his policy, so his blog is not for the faint of heart. What are you waiting for? Go check out his blog now!

If you’re interested in guest posting on The Lonely Tribalist, as well, read more here and send us your ideas via mooseandmichelle@gmail.com! We look forward to hearing your awesome pitches.

7 Replies to “Guest Post: Date Stalemate I – The Former Slave”